Mascara, as well as lipstick, is probably the most used makeup product in the world. The mascara emphasizes the eyes and gives them definition. It comes in two forms – waterproof and water-soluble.
Waterproof doesn’t dissolve in water, but it can cause problems. You can remove it with solvents as you wipe around your eyes, but this action may pull at eyelashes and even break the lashes.

Water-soluble are easier to remove because they dissolve easily in water.
Neutral shades of mascara color work best. The black works best for most people, making the eyes look brighter. A lighter shade will lessen the depth of deeper eyes. Brown and blue works best for those with blond hair. 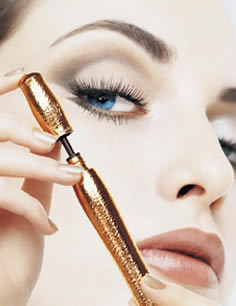 Nothing widens and opens the eyes like curling the lashes, even if you do only the tips, so curl the lashes before applying. Always start the makeup application with the mascara – this way it will be easier for you to clean up the eyelids if small particles should drop during the application. Flick the brush against holder to eliminate any little drops.

When moisturizing the face be careful not to get moisturizer on your lashes. When using take the wand out of the tube and let it dry slightly for one or two minutes. Apply a powder to the lashes, this will give your lashes volume and will allow to stay longer. Look down into a mirror and stroke lashes upwards with just the tip of the brush. Always brush the lashes from above and then upwards from below to get the both sides of the lashes.

First apply a thin coat, lit it dry and then build up with a second coat of mascara. When applying to the lower lashes, gently brush the tip of the applicator across them. Always allow the first coat to dry before applying the second coat. At the end comb the lashes to separate the hairs and to remove the excess mascara.

Amazing Summer Look
When it comes to holiday makeup, there can be a tendency to reach for cosmetics that either give a deep tan to pallid complexions and ...

A Bikini Wax At Home
Styles of bikini wax treatments are emerging in response to lifestyle and fashion trends.Waxing is probably the best way to remove the unwanted hair from ...

Simple Tips For Amazing And Healthy Hair
Our hair will always be the one of the most powerful weapons in our seduction arsenal because it’s probably the most potent of our secondary ...

Makeup
The most basic premise of the application of makeup for use on the face is to select an appropriate shade of foundation or base, in ...

French Manicure At Home
French manicure is probably the most preferred manicure among the women. It is appropriate for both teenagers and business women. This manicure gives the nails, ...

Use and Apply Facial Mask
The facial masks are probably the easiest way to maintain a beautiful and healthy skin. There are different types of masks appropriate for different skin ...